In the Fall of 2016, I became a CASA.  I didn’t know it then, but I was in it for the long haul and the ride of my pseudo parenting life.

I stepped into this role for the first time in early 2017. I thought I was ready.  After all, I’d gone through the CASA training, had a great CASA Support team behind me, and had already raised my own teenager into relative adulting success.  I can do this. Right? I thought to myself, then quietly whispered out loud as if to squash the doubter, Renee a child needs you. I swallowed those not-so-silent seeds of doubt and pushed forward. If I could help just one child, it would be worth it.

When kids are removed from the only home they’ve ever known, however neglectful, it is very traumatic.  They are thrust into a whole new world with new people, new rules, and new everything. Sometimes, all they have is a backpack.  This new world can be scary and it is vital that the team involved, and the CASA, wrap their figurative arms around these munchkins to keep them safe.

These kids have a teAm around them that looks something like this:  a child protection specialist, a social worker, a case manager, a therapist, a school counselor, a school advisor, an attorney, a doctor, and multiple staff in their living facility. They may even live in a group home situation with other similarly situated kids. If they are lucky they are assigned a CASA. Then multiply that by two for each sibling and it can become really complicated. My job as a CASA is advocacy, which means if you see something, say something.  Though in my case it also means to DO something which can and does translate into many things; like a house visit, a phone call (or ten), asking questions, attending meetings, making sure there is follow-through, and kids ultimately get exactly what they need.  These kids are now my kids.

I stepped into the CASA office and was immediately greeted by warm and friendly staff.  I was enCouraged to sit down at an old metal desk and an old metal chair. Both felt cold to the touch, but maybe that was my nerves.   I was nervous about getting my first CASA assignment. Will I be any good at this?  How can I really help these kids? What do I have to offer them, to the CASA office?   I thought to myself…then began to fill my own head with doubt with all the things I’m not.  Not a therapist, not a teacher, not a medical provider, social worker…NOT.  But then I remembered what I AM.  A mom, a person that loves kids, that believes every kid should have an opportunity not just for the basics of food, shelter, and a safe place, but to have a community of support rallying around them; cheering them on in football, sending them to summer camp or encouraging them in the smallest of ways.  I could give them at least a taste of that, and maybe, just maybe, a little bit of hope.

The CASA staff walked me through it.  “Do you want to work with girls or boys?” she Asked.  “Boys,” I said, having raised my son I thought I should stick to what I knew.  I know boys, I can do that, I thought to myself.  As the staffer started telling me about each case, she began sorting them by gender and type of need.  So many children.  You mean all these kids are abuse and neglect cases?  Oh my goodness, how can I choose just one? I need to help them ALL.   My mind swirled, I closed my eyes, and I reached into the stack of files and drew one back.  This was it.  These were the children I was going to help.  The folder looked like all the others. A few papers inside but not much.

Flat and cold to the touch with a Single white shiny label with the case number on it.  Impersonal to maintain confidentiality but there were real lives with really big stakes inside.  I opened it up and began to skim the pages.   Boys not unlike my own, with so much life before them and now in the middle of a crisis.  Drugs, sex, poverty, homelessness, food instability, hunger.  As I flipped through the pages the truth of this family was revealed.  Things I never wanted to know flew off the page and into my face.  These facts hit hard, and I could hardly hold back tears.  What could I do?  I had to help.

That was five years ago.  Since then I’ve learned a lot from some truly amazing people.  You see, most children are reunified with their families and at that time the CASA’s role comes to An end.  If it all works the way it should, this period is usually fairly short.  However, my case is different, my boys will not be reunified with their biological parents and they will remain in foster care until they are 18.  So, here I am on year five of advocacy for the same case when many of my colleagues have had lots of CASA cases; I am still attending monthly treatment team meetings, following up with medical providers, reading therapeutic treatment plans (googled lots of terms!) checking in with the CASA office and writing reports for the Court.  I reach out to professionals for resources asking for help, speaking up when one of my boys needs something, anything, and yes, sometimes, I cry.  But there is also joy.  Joy in seeing children reach milestones in school, in relationships with friends, with family, the reconnecting of healthy families that have been through so much.  There is hope in there, on those pages and in their little hearts and displayed on their little faces in a sweet toothy smile.  It’s our job to unlock it and set it free.  If I can do this, you can do this.  I promise. The bunchkins need you more than ever.

Currently, there are lots of children waiting for their very own CASA.

Training happens twice per year and the next one is right around the corner.  Spring training will start on March 29th, with an application deadline of March 4th.  Contact the Missoula CASA office to join in.  I promise you the adventure of your life.  You’ll cry, you’ll laugh, you’ll wonder why you volunteered, but then you’ll see the toothy grin on a bunchkin’s face and it will have all been worth it. 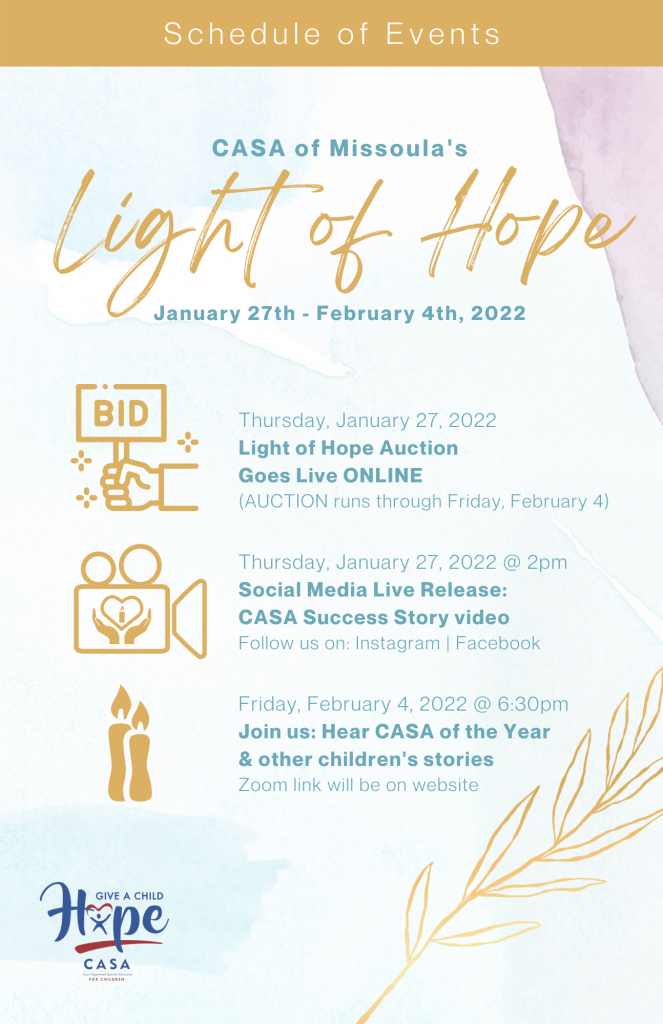 More From Our Blog

By: Jennifer Shannon and Dawn Donham The practice of law is hard The answers are never black and white, the deadlines are strict, and sometimes our client’s fate comes down to aRead More

Estate Planning – What Does It All Mean?

Estate Planning – What Does It All Mean?

If you’ve ever read articles online about estate planning, or met with an estate planning attorney, your head might be swirling trying to make sense of all of the various terms thatRead More

At Worden Thane, we believe it is of the utmost importance to celebrate the holidays with loved ones and dedicate time to sitting back and taking it all in We create time and space forRead More

While this website provides general information, it does not constitute legal advice. The best way to get guidance on your specific legal issue is to contact a lawyer. To schedule a meeting with an attorney, please call or complete the intake form below.